After last week’s impressive start, 14 chefs remain, all vying for the coveted title of Top Chef. With a Quickfire focused on queso and a carb-inspired Elimination Challenge, decadence is celebrated this week in the Top Chef kitchen. Considering how early we are in the competition, it’s still anybody’s game. But one chef’s repeated missteps quickly leads them to the Last Chance Kitchen.

Even as a self-proclaimed picky eater, I still find myself craving the dishes put up on Top Chef season after season, but tonight’s Quickfire may be the most tempting yet. Cooking for guest judge and Texas legend Irma Galvan, the chefs are tasked with making queso and a dipper to go alongside it. Once again, the prevailing chef will win immunity. But queso is an unassuming dish, and many chefs are unsure how to approach it. Jackson can’t blame his COVID-induced lack of taste for this rendition: He ignores the challenge’s guidelines almost entirely and makes a “crispy queso.” His caramelized cheese doesn’t look like queso or like anything appetizing at all. Padma Lakshmi’s disappointment is obvious and borders on anger. When Padma asks for gooey cheese and something to dip in it, you give the woman gooey cheese and something to dip in it!

While others decide to go completely outside the box, Evelyn’s and Demarr’s classic quesos reign supreme. Beyond the impeccable flavors, the food Evelyn and Demarr make seems so thoroughly inspired in every challenge. Even when contestants are pitted against renowned chefs with verifiable accolades, it’s the food made with passion and focus that succeeds in the Top Chef kitchen. When Padma asks Evelyn about her favorite queso, she answers quickly, “My mom’s!” Sometimes a cliché exists for a reason, and maybe food made from a place of love really does taste better. Nick’s surf-and-turf queso joins Evelyn’s and Demarr’s to round out the top dishes in the Quickfire, but there can be only one immunity winner. Demarr’s chili con queso with a pickled-pepper dipper gets him his first Quickfire win. Irma and Padma both rave about the freshness of the pepper and the outstanding balance of creaminess and spiciness in Demarr’s queso.

Even after multiple team challenges last week, the social dynamics between the chefs are still being developed. Their ability to work together is tested again this week when the chefs are divided into two teams. The football-inspired Elimination Challenge is convoluted, but maybe that’s just the communications major in me simply not understanding sports. For tonight’s challenge, each team — the Blue Wildcats, led by Dawn Burrell, and the Red Cougars, coached by Top Chef: Los Angeles and Top Chef: Charleston alum Sam Talbot — will put up seven carbo-loaded dishes. Despite the focus on carbs here, the chefs are encouraged to put a healthier spin on their meals. They will present their meals head-to-head on a football field, attempting to earn up to five judges’ votes per meal. Every vote in each round propels a team five yards down the field, with the goal of making it 100 yards and into the end zone (I do believe this is what they call a “touchdown”). If split voting prevents either team from making it the whole 100 yards, there will be no winning team, and every chef will be eligible for elimination. Joining Padma, Tom, and Gail at the Judges’ Table this week are chef Chris Shepherd and Top Chef: Charleston winner Brooke Williamson.

For the most part, the judges are impressed by the meals tonight, but with the judges split in almost every round, neither the Cougars nor the Wildcats win the challenge. There is, however, a clear individual winner: Demarr wins the Elimination Challenge. Back-to-back victories in a single episode are a great sign for the Chicago-based chef moving forward. Demarr’s dirty farro dish was inspired by his mother, who suffered a stroke when he was only 15. He describes his mom as Superwoman and says this meal is a vivid food memory. The love is once again evident in Demarr’s dish, pushing him a step above the rest of his competitors.

Padma praises the other chefs for their delicious meals but notes that our bottom-three chefs lacked a bit of inspiration and imagination. Top Chef consistently pushes chefs to think about food in new, creative ways, and tonight Stephanie, Luke, and Sarah just didn’t stand up to the rest of the group. Although Luke misses the mark with his butternut-squash–and–black-garlic dish, he is given props for his originality. Stephanie once again butts heads with her teammates, this time insisting on making a jasmine-rice dish despite Jackson’s request to do the same. With Stephanie taking on rice, Jackson is relegated to dessert, which ends up benefiting his team, as his dessert went up against Sarah’s weak “chickpea celebration.” Jackson’s win against Sarah in the final round prevents the Wildcats from reaching 100 yards and securing the overall win. Sarah attempts to defend her dish but seems to know it’s a weaker meal than some of the others. Ultimately, Stephanie’s overcooked rice and bland bean stew are what send her to the Last Chance Kitchen to compete against her former teammate, Leia. Will either of these chefs make it back into the Top Chef kitchen?

• You know what, I’ve never thought about it this way, but Sarah arguing that “ice cream’s really just cold cheese” is kind of a great point — suddenly feeling more open to the idea of savory ice cream.

• Padma oh so casually referencing Dawn’s Olympic career, as if her mastery in both sports and cooking isn’t wildly impressive.

• Sam’s making an early case for fan favorite (or at least this fan’s favorite) with his long-winded explanation of how much he loves any and all preparations of potatoes.

Keep up with all the drama of your favorite shows!

By submitting your email, you agree to our Terms and Privacy Notice and to receive email correspondence from us.

Mon Mar 14 , 2022
This is part of a weekly series introducing readers to individuals who are passionate about our Mid-Valley community. At the back of South Salem High School, chaos is afoot. But only good trouble, in the form of giggly students weaving in and out of the kitchen. Amidst the delicious aromas, […] 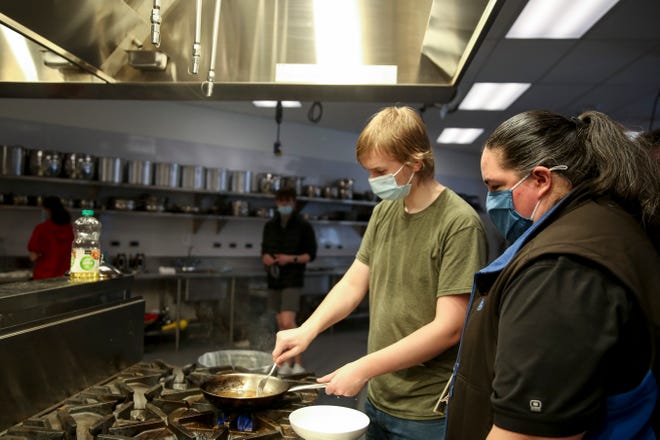