GILBERT, AZ (3TV/CBS 5) — An Arizona chef is heading to the ‘Big Easy’ to compete against 12 other chefs from around the country for the title of King or Queen of American seafood.

The 2021 Great American Seafood Cook-Off is being held in none other than New Orleans, where Louisiana’s Lieutenant Governor Billy Nungesser will name this year’s best seafood chef. Chief of Culinary Chef Edgar Teran for long-standing Phoenix joint Someburros, and its new sister restaurant Isabel’s Amor, will be proudly representing Arizona in this 17th annual event taking place at Ernest N. Morial Convention Center. The competition will kick things off with an opening ceremony at 11:30 a.m. before the chefs roll up their sleeves and start cooking in front of a live audience and a panel of nationally acclaimed judges. The judges will score based on presentation, creativity, composition, craft, and flavor.

“Following a challenging year for all of us, the Great American Seafood Cook-Off is the perfect stage to celebrate Louisiana and America’s domestic seafood industry – the best in the world,” said Louisiana Lt. Gov. Nungesser. “This year, we are excited to welcome a very talented field of chefs from all over the country vying to be crowned the next ‘King or Queen of American Seafood’ right here in New Orleans. Each chef will be showcasing their skills with domestic seafood to present the best seafood dishes.”

Chef Teran will face off against a deep field, mostly from states with direct ocean access in the south and along the Gulf or East Coast. Here is a list of Teran’s competitors, their respective restaurants, and home states:

Chef Teran took some time out of his busy week of preparation to sit down with Arizona’s Family Foodie Jeff Popovich to discuss the excitement and how he’s been getting ready for the big competition. Teran says he’s excited to have the chance to put Arizona on the map for seafood after the Louisiana Seafood Board reached out to select him to represent the state.

“We were the first ones they thought of when the time was right to pick a candidate from Arizona. And we jumped on board; I couldn’t resist an opportunity to go compete in a cook-off, something I’ve never done before. Not going to say no to any new experience like that,” Teran said.

While seafood is something Arizona is not necessarily known for (being a land-locked state doesn’t help), that’s not curbing Teran’s ambition to introduce Isabel’s Amore Mexican culture to Louisiana.

“Introduce them to what we can make. We can make this Mexican cuisine into seafood, and there’s no limit to food. You can make whatever you come up with, whatever you dream of, you can make it happen with food,” Teran explained.

And while Teran’s competition-curated dish may not have a name, the description alone gives you an idea for how Teran aims to bring Arizona cuisine and Sonora-inspired taste to a region known for its seafood. Teran pulled on his upbringing through Someburro’s kitchen to create a competition plate featuring a tamal topped with a shrimp and veggie crema and a green chili strip as a Southwestern garnish.

“I went with a fresh corn tamal with roasted green chilis, topped it off with a veggie shrimp crema, and made sure that the shrimp is very well incorporated in there. But you also want to highlight the fresh tamal that we’re taking, the homemade tamal, just the homemade feel of everything we do here at Isabel’s Amor,” Teran said.

And when I say Teran was brought up through the Someburro’s kitchen, I wasn’t kidding! Teran started working for Someburro’s when he was just 17-years-old and a senior in high school. He started by managing the front counter for about five to six years, managing staff, training new hires, and opening new Someburros locations around the Valley. Then in 2013, President and CEO Tim Vasquez and his wife Julie opened Isabel’s Amor in Gilbert off of Val Vista Drive and William Field Road due to a need for upscale Mexican cuisine and tequila varieties in the East Valley. Teran went to help the new venture and ascended through the ranks from Bar Manager to eventually the head chef of the entire restaurant group.

Tim Vasquez inherited the reigns of the Someburros Restaurant Group from his father, George Vasquez, the son of Isabel Vasquez, from whom the heirloom recipes descended. Isabel opened the family’s first restaurant, Poncho’s, in south Phoenix in 1972, handing out the family’s authentic Sonoran-style cuisine from the window of her home kitchen! Isabel, her son George, and his wife Mary would later open the first Someburros in 1986. This local business embodies that sense of family throughout the company, and it clearly had an impact on Teran and the inspiration behind his passion for cooking.

“Cooking to me means, it means freedom. It means art. It means family. You can always gather your family with a nice plate of food, a nice plate of tacos, and they’ll be there. It’s a good way to get family together, and it’s definitely a part of the culture here at Isabel’s that we are family, the whole company, we like to call each other family. That’s what cooking does for me,” Teran explained.

Whether you’re a seafood enthusiast or not, we’re, in a way, one big state-wide family as Arizonans. I think it’s safe to say we’re all rooting for Teran to bring home the title and help continue to put Phoenix and the state on the map as a food destination. Good luck, Teran!

Tue Aug 10 , 2021
CINCINNATI — BLOC Ministries Teaching Kitchen, an eight-week program for aspiring chefs who have dropped out of high school or other career fields, got a $100,000 check from Ohio Gov. Mike DeWine last week. It’s one of Ohio’s largest single payments through the Federal Temporary Assistance for Needy Families Program. […] 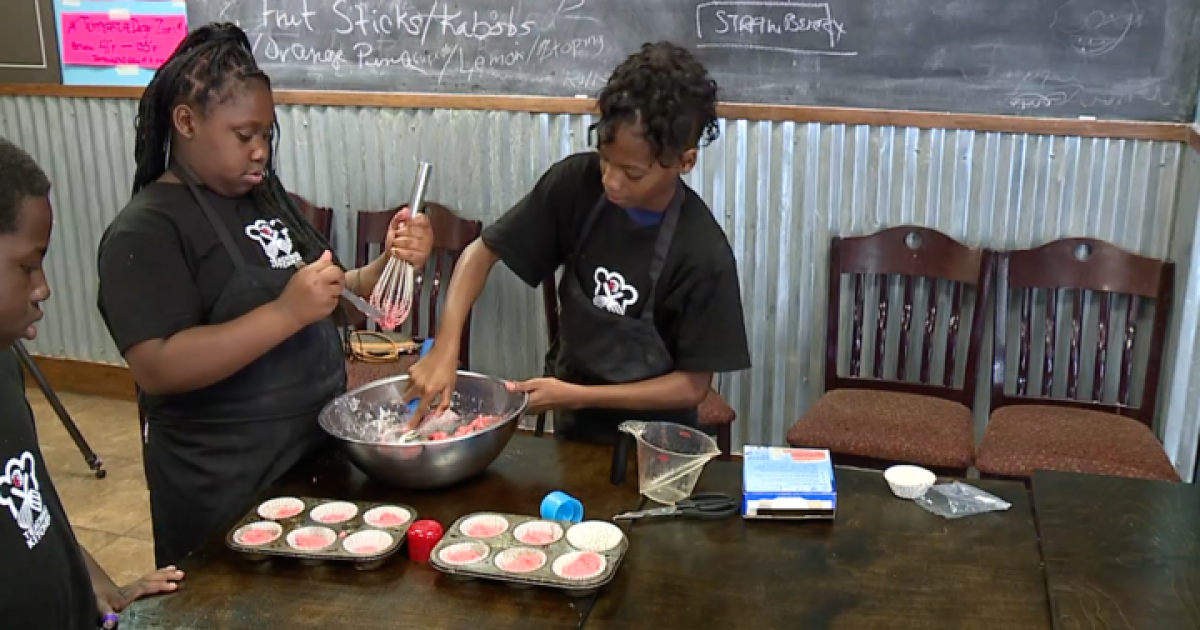