POST FALLS — Self-proclaimed “BBQ chef” Joshua Lozano is mostly self-taught. For the past eight years, he has explored just about everything: pastries, baking, fine-dining, Mexican and Asian cuisine, farm-to-table, even pizza.

And now? Lozano is focused on his passion for live-fire cooking.

Forced into making a different plan after a sous chef position he’d accepted fell through because of COVID closures, Lozano launched his mobile company at an inopportune time. However, the pandemic hasn’t taken a bite out of business.

During a season of exploring the art of pastries, Lozano started to experiment with live-fire baking.

Unable to afford professional chef’s training but wanting to learn everything he could about the art of cooking, Lozano went full force into the cooking industry.

For the first three years of his career he worked two full-time cooking jobs, a morning and an evening shift. Between shifts he would take requests from his wife, making “anything she wanted from scratch,” Lozano said. She would see ideas on BuzzFeed and Lozano would create the recipes.

“The first time I ever made bread, it was for her,” Lozano said. “It was awful. It was dark and we couldn’t even cut it.”

Through trial and error, he eventually mastered the skill, he said. He also spent several hours a day poring over cookbooks, soaking in as much knowledge as possible.

To learn the flavor profiles of spices, Lozano would “try every spice in the rack.” One at a time, he ate cayenne, red pepper, black pepper, mustard and absolutely “everything,” Lozano said.

“Now I know what the flavor profiles are,” Lozano said. He can taste dressings, or sauces and easily recognize the spices and flavors they contain.

He’s had requests to visit the East Coast in the spring, he said. For now, he works with local venues and catering events. Lozano and his two partners are looking into a building to put up a full-time restaurant as well, he said.

Lozano’s barbecue was specifically designed for a whole hog roast. It has the capacity to feed 400 people.

“It’s a big mamma-jamma. If I butterfly the pig, it can hold two,” he said.

On Sunday, Defiant BBQ will partner with Selkirk Abbey Brewery in Post Falls to cater a beer-pairing event, something owner Jeff Whitman has never done before.

“I sent him a cold email and he responded right away,” Lozano said. “We met the next day and immediately hit it off, personality wise.”

The two bonded over a mutual love of beer, cigars, food and history, Lozano said. Serving a five-course dinner, each course will feature a beer carefully matched to complement the flavors.

Lozano and his crew have experience catering paired events. They did a whiskey pairing menu at Sedlmayer’s Resort and Restaurant in Spirit Lake on a monthly basis last summer. Tickets for the six paired courses sold out in a week and a half, Lozano said.

“It was a wild menu,” Lozano said. “Each course we offered something that was smoked. We did coal roasted oysters, an elk and pheasant risotto and served buffalo steak.”

Defiant BBQ will be featured at Winterfest in Moscow later this month. They’re doing an event at Racketeer Cigar Lounge on Jan. 25, and in February will partner with Coeur d’Alene Cellars for a wine-pairing dinner.

Lozano and his wife, Jessica, have been married for 10 years and have two children, ages 4 and 2. Expecting twins in April, their household is a busy one, with no signs of slowing down anytime soon.

When Lozano left his former job to pursue cooking, his boss commended him for finding his passion. 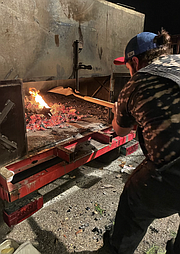 Sat Jan 15 , 2022
JACKSONVILLE, Fla. – A local food truck owner who specializes in breakfast and soul also wants to help others get their start in the food truck business. Chef Tina Tucker has always had a passion for food, but her journey in the food industry didn’t start until she received a […]