The growing number of food trucks in Lincoln would be able to set up in certain downtown locations as part of a pilot program to further expand the city’s program under an ordinance considered Monday by the Lincoln City Council.

Urban Development Director Dan Marvin said the pilot program would run through September and October, then city officials could rewrite the ordinance over the winter to make it permanent.

“This is a food truck ordinance we’ve tried to do many times,” he said, and it accompanies a pilot program begun this spring that allows food trucks to park in neighborhoods to serve graduation parties and other events at people’s homes.

Trucks moving into neighborhoods and some downtown areas are the latest proposed steps in the evolution of food trucks in Lincoln, which made their first appearance in 2011, when they had to park on private property if they wanted to serve downtown customers.

Two years ago, a pilot program allowed food trucks to park in four zones in downtown, expanding access for food trucks in the city.

Before that, food trucks could only park on the street with a special permit, which required four weeks’ notice and closing of the street.

As part of the pilot program proposed Monday, food trucks will be allowed near the State Office Building, at 14th and Q streets, and in the south Haymarket under the Rosa Parks Way overpass, Marvin said.

The pilot would allow the council to amend and grow the program, he said.

“We think this has a lot of positive impacts for downtown,” said Todd Ogden, president of the Downtown Lincoln Association. Employers have been trying to get their employees to return to downtown after the pandemic and this is one way to do it, he said, by creating activity on the street in areas underserved by restaurants.

While there may have been a time when restaurants didn’t want the competition of food trucks, Ogden said he’s been hearing they’re so busy now they welcome the addition.

Special events at Pinnacle Bank Arena would be a great spot for food trucks, he said.

Nick Maestas, who owns Muchachos, said the latest pilot program has been a long time coming, after the pandemic put so much on hold.

“Now we’re at a place where I’m really anxious to see how food trucks can change the face of downtown,” he said.

Councilwoman Tammy Ward, who has been instrumental in promoting the food truck program, said food truck operators have waited for this for a long time.

“We don’t want Lincoln to get behind,” Ward said. “I know Urban Development has more ideas for food truck parks. There’s a lot more we can do. We’ll keep working on it.”

The council will vote on the ordinance Aug. 15.

Stay up-to-date on the latest in local and national government and political topics with our newsletter.

From sugar cookies to smoked clams, 17 food safety recalls you should know about right now

Tue Aug 9 , 2022
IReadyMeals Shrimp Cooked with Cocktail Sauce food stuff label (Fda) Albertsons Organizations has voluntarily recalled three ReadyMeals seafood items geared up in retailer for the reason that they have allergens not specified on the individual ingredient labels. The precise allergens may bring about severe allergic reactions in those who have […] 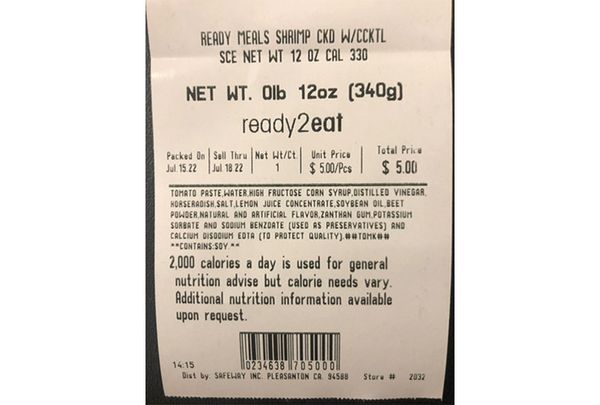