At the end of May, it looked for a moment as if Los Angeles dining was slowly inching back to what passes for normal in 2020 — restaurants and bars with spaced tables, customers required to wear masks until their food and drinks arrived.

Then COVID-19 cases spiked in record numbers, and hospitalizations rose, and on July 1, Gov. Gavin Newsom again ordered bars and indoor dining closed for at least three weeks. It will likely be longer.

In Los Angeles County, outdoor dining at restaurants remains viable. Many of us aren’t quite there yet, and we are doubling down once again on takeout.

Some of L.A.’s finest takeout options aren’t coming from established restaurants. A growing and compelling takeout subculture has emerged during quarantine, led by chefs and other industry professionals who have been laid off from their kitchen jobs or whose catering gigs have dried up. They’re cooking restaurant-quality food, posting menus on their social media feeds, receiving orders through direct messages and accepting payment through mobile services. Some offer curbside pickup; others deliver.

It’s a way for these self-starters to sustain themselves, to continue nourishing their communities and to find some semblance of footing as the ground keeps shifting.

“When you’re in the restaurant business, you have to be almost insane in your passion for it,” said Phert Em, who recently transformed her Cambodian pop-up Khemla into a delivery service. “Starting something like this right now is a way to reinvent yourself, to express how you want to live your life and to answer the question, ‘What’s the next step?’”

Em echoes what I heard from the other chefs behind these seven takeout upstarts: Their stories of survival and ingenuity are key ingredients for the uplifting food they’re making in an uncertain world.

Brandon Gray — whose resume includes Providence, Trois Mec, Cape Seafood & Provisions and Best Girl in the Ace Hotel — currently runs the kitchen for Royce Burke’s Secret Lasagna, a takeout restaurant in the West Hollywood Gateway complex that opened shortly after the shutdown. A few months ago, Burke asked Gray if he could concoct an off-the-cuff pizza to bring to a friend, who turned out to be chef, author and radio host Evan Kleiman. On her KCRW-FM (89.9) show “Good Food,” Kleiman mentioned how much she had enjoyed Gray’s pizza, which he’d crowned with arugula pesto, smoked cheese, Spanish ham, snap peas and summer squash. Gray asked himself, “Am I about to start making pizzas for a living?”

He has a gift for it. He stretches the tangy dough to crackery thinness and covers it with sweet, dense sauce made from Bianco DiNapoli tomatoes and produce from the Santa Monica Farmers Market. An early standout among his dozen-plus options: Straight Up Menace, with lamb sausage, pickled peppers and arugula evenly distributed for sharp, punchy bites.

His pizzas have grown so popular that Gray can see himself eventually opening a takeout business in a small storefront. For now, he bakes pies, after his shifts at Secret Lasagna, from Fridays to Tuesdays. Over-ordering is a wise strategy: Brandoni Pepperoni pizzas reheat beautifully.

After years on the line in restaurants such as Botanica, the Exchange at the Freehand L.A. and Rustic Canyon, Rashida Holmes had been recently catering and holding pop-ups serving the dishes of her Bajan heritage; her specialty is flaky rotis paired with chicken curry topped with lemony slaw.

In May, to rebound after the shutdown, she wondered what the response might be if she made savory patties for customers to pick up from her home in Boyle Heights. She made three variations: peas and potatoes, oxtail with peppers, and callaloo greens with crab and pork belly. The first batches sold out on Instagram in an hour.

Holmes will soon be moving her operations to Crafted Kitchen, a shared-use space in the Arts District, where she’ll offer rotis and patties for curbside pickup.

She’s grateful, she says, that she didn’t end up committing to a permanent location earlier this year.

“With the rush of support for Black-owned businesses and LGBTQ-run businesses, the takeout model has worked for me. I’m walking the silver lining of it,” she says.

For the last seven years, Danielle Bell and Pablo Osorio hosted a regular dinner series, first in New York and then in Los Angeles; their menus combined the specialties of Osorio’s native Peru with desserts from Bell’s Kentucky upbringing. Her biscuits and gravy and his creamy, gently spicy aji de gallina were hits at the Hollywood and Altadena farmers markets.

They’ve now centered their energies on delivery. “Decadence” is a word the couple often use to frame their cooking; the word particularly applies to a rich, sherry-laced she-crab soup I ordered last month, and to the thick wedge of caramel-glazed pound cake that followed. “Comfort” pertains equally: black cod in an herby stew with yucca and tomatoes, arroz con pollo, mixed berry pie, strawberry-goat cheese ice cream that always sells out fast.

Menus change weekly; order by Wednesday morning for deliveries on Fridays and Saturdays. Delivery only. (646) 391-4529, de-porres.com.

They kickstarted their menu ideas by brainstorming one dish and then riffing on the theme. A few weeks back, for example, Chacon was flipping through David Lebovitz’s “The Perfect Scoop” and noticed a recipe for saffron ice cream, which Lebovitz suggested sprinkling with pine nuts. Chacon and Weyland grilled peaches as a pairing, and a motif of summer vegetables with flavors inspired by the Middle East coalesced around the dessert: beef-stuffed summer squash with muhammara and za’atar yogurt, a grilled vegetable tian and acid-sparked salads of mixed beans and cucumber, tomato, avocado, pickled onion and mint.

Dinner for two costs $95. Chacon and Weyland deliver to homes every Tuesday; order by direct-messaging Chacon on Instagram. instagram.com/marlonchando/

Khemla began as a pre-COVID-19 pop-up collaboration between two of Josef Centeno’s staff: Phert Em, who was general manager of Bar Amá and who drew from her Cambodian heritage to create Khemla’s menus, and Mikey David, a sommelier at Orsa & Winston.

As Cambodian New Year approached in mid-April, Em decided to put forth a quarantine edition of Khemla; she made salaw machu, a sour soup with fish, shrimp, tamarind, pineapple and basil; baked chicken wings scented with lemongrass, garlic and ginger; and baked durian-banana bread with chunks of dark chocolate for dessert.

She’s pushing herself to present weekly, affordable menus (typically, three dishes for $30), in part to introduce more Angelenos to Cambodian cuisine, which is under-represented locally.

“It’s scary but also exciting to be able to keep serving people and nurturing,” Em says. “I want to be part of the community that’s transforming how we dine.”

For more than a year, Nan Yimcharoen had been slowly building a career making omakase dinners for guests in her Silver Lake home. She grew up in Bangkok, and culinary entrepreneurship runs in her family; her grandmother had a dinner cruise business and prepared meals for Thai royals. What Yimcharoen really aimed to master, though, were sushi and other fundamentals of Japanese cuisine.

When the pandemic derailed her momentum, she responded by crafting jeweled sushi dishes for takeout and wound up creating a far larger audience for her talents. She began offering takeout via menus she posted on Instagram. She included simple bentos and panang curries early in the mix, but attention rocketed as she started concentrating on elaborate chirashi bentos: salmon, scallop, king crab, uni and dashi-marinated ikura (among many variations) arrayed with pickles and other vegetables over rice.

On social media and in person, the colors glow like stained-glass window panes catching sunlight. KinKan’s gilded creations are splurges: Most dishes cost $35 to $75. Yimcharoen will prepare them in lacquered bentos or ceramic bowls for an additional $5; she says 85% of her clientele chooses that option for the specialness it engenders.

“I try to put myself in people’s shoes,” she says. “I’m trying to think of dishes and presentations that no one else is quite doing. I figure that’s what customers want right now.”

Josh Buckwald had spent years honing his pasta skills, most recently as Steve Samson’s sous chef at Rossoblu. He was preparing to sign the lease for his first restaurant when everything changed in March.

Buckwald rechanneled his efforts into a delivery service for pasta and sauce; Roni Davis, a fellow Rossoblu alum, joined him when demand grew feverishly.

Buckwald handles the delivery runs. Even behind a mask — and from a safe social distance — you feel the sincerity of his smile as he sets down your order and dashes off to his next stop.

Mon Jul 13 , 2020
NEW YORK (AP) — When it launched in 2017, the catering tech platform HUNGRY had one customer in mind: well-heeled office workers. The goal was to bring delicious meals to places like Microsoft, Amazon and Google by creating networks of chefs and deliverers. HUNGRY was going to be the Uber […] 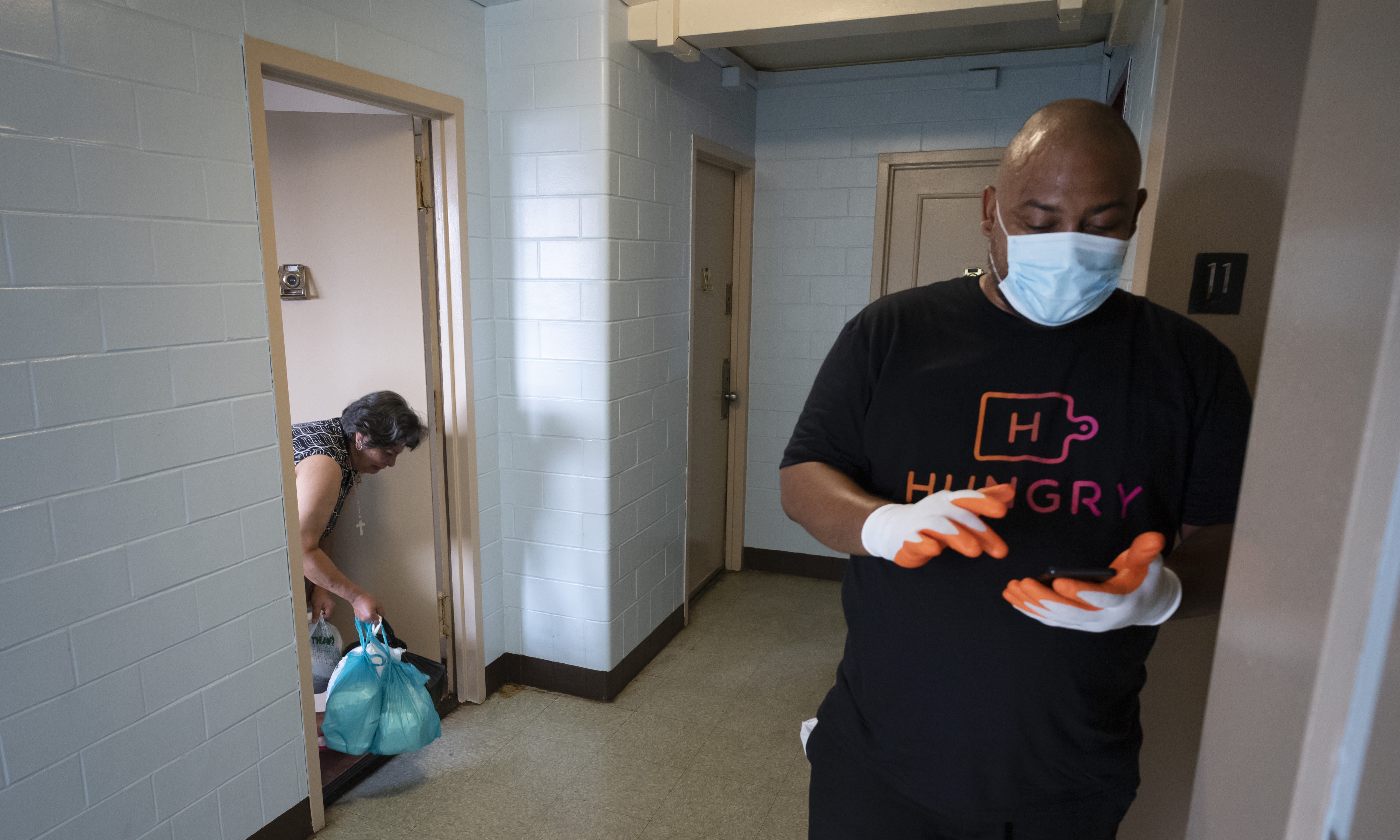