It’s hard to believe that, less than 100 years ago, it was considered inappropriate for women to dine in restaurants — let alone run them. Now, female chefs are helming successful kitchens across the country, and there are nearly 20 Michelin-starred female chefs in the United States today.

© Amber Hawkins – Getty Images
Here’s a look at the progress being made in the historically sexist culinary field, along with the female chefs who have pushed through it all.


But when it comes to gender equality in the restaurant industry, there’s still a long way to go. In 2019, just 24 percent of U.S. chefs and head cooks were female, according to stats from the U.S. Census Bureau, and female chefs made only 76 cents to each dollar that male chefs did, per data from the U.S. Bureau of Labor Statistics. That same year, only 11 of the World’s 50 Best Restaurants, a highly esteemed list, were run by women.

Despite this, there are women who have pushed through the rampant sexism of the restaurant world to win accolades like Michelin stars and James Beard Awards. For Women’s History Month, we decided to take a look at the rise of women in the U.S. restaurant industry, including the challenges female chefs encounter and the pioneers who paved the way for today’s talent.

A look at the uneven playing field

While many mom-and-pop establishments in early American history were run by — you guessed it, moms and pops — the idea of a woman running a professional kitchen solo was long unheard of in the U.S., writes Jan Whitaker in the Boston Hospitality Review. In fact, even dining inside restaurants was considered unladylike for most of the 19th century, and segregated women’s and men’s dining rooms were later established to keep women away from the“rude looks” and“vulgar language” of men.

However, once the Prohibition movement helped curb public behavior in 1920, the female dining market began to expand.“Its growth rivaled in significance the rise of women restaurant workers and proprietors in terms of the future development of the modern restaurant industry,” Whitaker writes.

However, the word“chef” — and the concept of a professional chef itself — was imported from France, where the professional kitchen has long been considered male domain, writes Charlotte Druckman in Skirt Steak: Women Chefs on Standing the Heat and Staying in the Kitchen.

“When we borrowed [the word] chef from the French, we took more than just a title. We acquired the entire system — kitchen setup included; it became the foundation on which the American restaurant industry was built. Even in our melting pot, that professional pocket has been slower to get with the program or yield to diversity than you’d think (or hope).”

Although World War I and World War II afforded opportunities for women to fill the shoes of men in society, including as professional chefs, most women were cooking at home for the bulk of the 20th century.“In the late 1960s a career as an astronaut was considered more promising for a woman than that of chef,” Whitaker writes. Druckman points out that, up until the rise of food television and the celebrity chef, sparked by the debut of the Food Network in 1993, being a chef was considered a blue-collar profession largely unfit for women.

That’s not to say zero females were working in the industry since its beginning, but the mentality that women belong in home kitchens — and not professional ones — has gone a long way in limiting opportunities for women to enter the biz. And it’s just one of many challenges that female chefs, very much in the minority but no longer a rarity, have to overcome in pursuit of their passion.

As recently as 2013, the gender disparity in the restaurant industry was on full display — on the cover of Time magazine. Three men were pictured with the cover line“The Gods of Food,” and the accompanying article,“The 13 Gods of Food,” featured no female chefs. It sparked quite a conversation, to say the least.

In a 2013 Mother Jones article,“The Demi-Glace Ceiling: Why Do We Ignore Lady Chefs?,” responding to the backlash, writer Tom Philpott pondered“the increasingly glaring fact that women are largely shut [out] of the food world’s top honors.” One factor he pointed out was that an estimated 90 percent of U.S. restaurant kitchens follow the French brigade-style format. This assembly-line approach, in which the chef at the top of the hierarchy calls all the shots, isn’t inherently sexist, he writes. But, if a sexist man holds that position, he can fully stop the advancement of a female cook or chef on his staff if he wants to.

And some of them want to. One prevailing mentality is that female chefs don’t have the skills or knowledge to make it as professionals, and they aren’t taken seriously.

Niki Nakayama, a Michelin-starred chef and restaurateur in Los Angeles who was featured on Netflix’s Chef’s Table, has observed this firsthand, she tells Shondaland.“The criticisms I sometimes face often make me wonder if a male chef would receive the same scrutiny.”

Janine Booth — a chef, restaurateur, former Top Chef chef-testant, and James Beard Award semifinalist from Australia — has faced the same hurdles, she says.“Even as an owner of restaurants, I have had people, both men and women, … doubt my talents and drive and try to bring me down — some behind my back, and some directly to my face.”

Others think that women don’t have the stamina to meet the physical demands of the job, which are certainly taxing but not outside the realm of female capability. Miami chef, restaurateur, and James Beard Award-winner Michelle Bernstein told Druckman for Skirt Steak:“In a kitchen full of boys, I’d cut myself on the meat slicer, and the bets were Michelle won’t come back to work for days.”

In the face of all this, many female chefs are forced to ask themselves: Is it worth it?

So, where do we stand today? Our sources agree that, since they started in the biz, many aspects of the restaurant industry have improved for female chefs.“We are seeing many industries, especially those dominated by men, step up and create even more of an open-door environment, revisit their policies, train and retrain staff with inclusion training, sexual-harassment training, and what is and isn’t appropriate in the workplace, giving women the confidence to succeed in their career without reservations,” Booth says.

Despite these changes, there’s still much progress to be made.“The glass ceiling has definitely been cracked,” Bernstein says.“It’s just not gone yet. We need equal pay, equal opportunities, equal job offers to all sexes, all races, all colors.”

Gallery: 5 Biggest Fast-Food Menu Changes You’ll See This Year (Eat This, Not That!)

In the U.S., many influential female chefs have surmounted these considerable challenges, climbed the ranks in the industry, carved out their own niche — and blazed a trail for the women that followed. Here are nine of them, in no particular order.


Born in Texas and raised in Alabama, this self-taught baker is the doyenne of Southern desserts, having quietly honed her craft at Highlands Bar & Grill in Birmingham since 1982. Lauded for her coconut-pecan cake and lemon-meringue tart, Miles was named Outstanding Pastry Chef by the James Beard Foundation in May 2018 — a milestone for BIPOC chefs.


Considered the mother of the farm-to-table movement and modern California cuisine, Waters famously eschewed the brigade-kitchen model at her Michelin-star Berkeley restaurant, Chez Panisse, which celebrates 50 years in 2021. She received the Lifetime Achievement Award from the James Beard Foundation in 2004 and the National Humanities Medal in 2014.


Chase was not only considered the Queen of Creole Cuisine, but the New Orleans chef, who passed away in 2019, used her iconic eatery, Dooky Chase, as a meeting place for civil-rights activists in the 1960s as well as a gallery to promote African-American art. The James Beard Foundation inducted her into its Who’s Who of Food & Beverage in America in 2010.


At age 21, Crenn left her native France to pursue a career outside the deeply rooted patriarchal restaurant industry in her homeland. She put down roots in San Francisco, where her Atelier Crenn earned three Michelin Stars in 2018, making her the first female chef in the U.S. to earn that honor. She also runs Bar Crenn and Petit Crenn.


Hamilton has proved the staying power of humble, homespun restaurants with Prune, an East Village staple since 1999. The eatery was included in the Bib Gourmand section of Michelin’s 2014 New York guide, and eight episodes of The Mind of a Chef, the PBS show formerly produced by Anthony Bourdain (he was a Prune fan), centered on her and the restaurant.


After interning under Gay Savoy in Paris, this Iron Chef winner and Top Chef Masters contestant became the first female guest chef to cook for a White House state dinner, in 2015. Her former New York City restaurant, Annisa, which closed in 2017, won a Michelin star in 2006 and received three stars from the New York Times.


You can credit the rise of artisanal bread (sourdough in particular) in the U.S. to Silverton, a trend she started after opening La Brea Bakery in Los Angeles in 1989. Prior to that, she was the opening pastry chef at Wolfgang Puck’s Spago, and she later co-founded the influential Osteria Mozza, which won a Michelin star in 2008. She also co-founded Pizzeria Mozza and Mozza2Go.


Since 2005, this Philippines native has served as the first female executive chef at the White House. She started there as assistant chef in 1995 and has cooked for the Clinton, George W. Bush, Obama, Trump, and Biden administrations. She’s a member of the exclusive global culinary organization Le Club des Chefs des Chefs.

Chelsea Greenwood is an award-winning lifestyle writer and editor whose work has been featured in InStyle, Teen Vogue, SELF, Racked, Vulture, Brit + Co, SheKnows and Vice. Follow her on Twitter @cpgreenwood.

Contestants, Judges, Location, & Everything To Know

Thu Apr 1 , 2021
Bravo’s cutthroat cooking competition is back with 15 new chefs vying for the coveted title of Top Chef. Like other reality TV shows, Top Chef Season 18 will look a little different from past seasons; while the structure of the show remains the same, the production implemented various COVID-19 safety […] 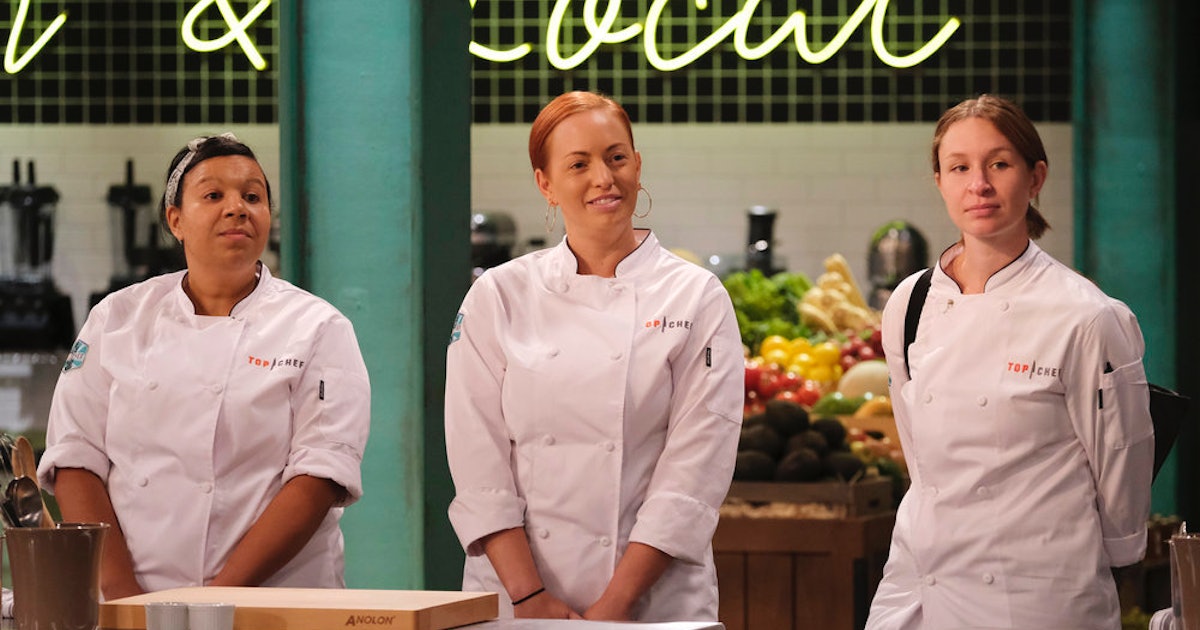