Mr. Haller was a Swiss-born French chef who joined the White House in 1966 after impressing President Lyndon B. Johnson years earlier with his cooking at New York City’s Sheraton-East Hotel. He remained at 1600 Pennsylvania Ave. late into the Reagan administration, mastering the tastes of five first families over a span of 21 years and pulling off impressive culinary feats on short notice.

A consummate professional who was never known to gossip about what he saw or heard at the White House, Mr. Haller catered to the tastes of the first families, whether asked to prepare deluxe continental cuisine or simple home-style American meals.

“It’s quite simple, really,” he told the Albany Times Union in 2002. “You keep your mouth shut. There are no prima donnas at the White House except the president of the United States. . . . Some chefs like to tell the guests what to eat. It’s not like that at the White House. They tell you what they want to eat and you do it.”

Trained in classical French cuisine in Switzerland, Mr. Haller came to the White House after René Verdon — the French-born chef brought in by the Kennedys in 1961 — quit as executive chef in 1965 in a dispute with Johnson over the president’s food preferences and the sudden arrival of frozen and canned vegetables in the White House pantry.

Deciding on menus often required consultation with the first ladies. The biggest challenge for Mr. Haller came from Nancy Reagan, whom he described as the most involved and particular first lady he worked with. She insisted that Mr. Haller and his staff cook the planned meal before important functions, and she would suggest changes to the taste and appearance of the foods.

“We take pictures with a Polaroid so the staff knows how they are to be done,” Mr. Haller told the New York Times in 1987. “With the Reagans you have to be more creative.”

Mr. Haller also admitted to two occasions on which he was reprimanded. The first was when he told the news media that Nixon liked to mix his own martinis before dinner; the second was when he failed to remove the strings from the green beans he served Johnson. That night, after dinner was served, the butler told Mr. Haller the president wanted to see him.

“I went in, and he had some strings from the beans in his hand,” Mr. Haller told the Philadelphia Inquirer. “He handed them to me and said, ‘I saved these for you.’ ”

The rest of his employment, however, was marked by one culinary coup after another. In 1973, he produced a dinner for 1,300 people honoring returned Vietnam prisoners of war. The event was held under a giant tent, with a menu that included supreme of seafood Neptune — an elaborate seafood salad — roast sirloin and strawberry mousse. Because the White House didn’t have enough ovens and stoves, much of the cooking took place at the nearby Mayflower Hotel.

Another success came during the bicentennial in 1976, when Britain’s Queen Elizabeth II visited the White House of Gerald R. Ford. Mr. Haller served — just as a first course for 250 people — 25 four-pound lobsters in a 50-gallon steamer. During that year, Mr. Haller was responsible for preparing several formal dinners each week and often worked 18-hour days. In 1978, for a celebratory dinner after the signing of the Camp David Accords, Mr. Haller had just one week to pull off an event for 1,300 guests of the Carters.

There were also times when demands on the White House kitchen were minimal. When King Faisal bin Abdulaziz of Saudi Arabia visited, for example, he brought his own food in briefcases. “I think he had cottage cheese that night,” Mr. Haller said.

One of the chef’s greatest triumphs was a lobster mousse made from his own mold — thanks to a sheet-metal worker on staff — for French Prime Minister Jacques Chirac in 1986.

“I put the lobster mousse on a big china platter and glazed the mousse with aspic,” he told the Chicago Tribune in 1988. “On one side I placed 12 medallions of lobster decorated with truffles. On the other, I made a floral design with carrots, truffles, leeks and cherry tomatoes. It looks like a bouquet. On the outside edge, I had half quail eggs covered with caviar and standing in little cucumber cups. Sounds good, no?”

Born Henri Haller in Altdorf, Switzerland, on Jan. 10, 1923, he was the son of a French mother and a Swiss father who worked in a factory. He helped his mother cook and tend to her vegetable garden, and developed a flair for cooking. When he was 14, his father planted the idea of making his passion a career.

“Why don’t you be a chef,” Mr. Haller recalled his father saying. “You can travel all over the world. And you will never have to worry about a job. People everywhere have to eat.”

At 16, he did a culinary apprenticeship at the Park Hotel in Davos, Switzerland, where he learned the art of the mashed potato and studied French, German and Italian cooking.

Over the next decade, he worked at top hotels and restaurants in Bern and Lucerne, Switzerland, and practiced his English. When he was 25, he moved to Montreal to work for the Ritz-Carlton and then arrived in New York City in 1951.

He spent several years at a country club and then at Hampshire House near Central Park. In 1962, he left for the top chef position at the Sheraton-East Hotel, where his food impressed Johnson.

After leaving the White House in 1987, Mr. Haller published “The White House Family Cookbook,” filled with dozens of recipes. He later created menus for Norwegian Cruise Lines and an assisted living company, partnered with a supermarket to create a line of gourmet foods and was featured in 1996 in a PBS cooking series called “The Presidential Palate.”

In 1954, he married Carole Itjen. In addition to his wife, of Gaithersburg, survivors include four children, Robert Haller of Palm Harbor, Fla., Richard Haller of Highland, Calif., Susan Capps of Gastonia, N.C., and Nancy Bender of Holly Springs, N.C.; and five grandchildren.

One of Mr. Haller’s most vividly remembered days at the White House was when Nixon resigned on Aug. 9, 1974. That morning, Mr. Haller said, the president walked into the kitchen barefoot and wearing pajamas and asked for corned beef hash and a poached egg. Nixon then shook Mr. Haller’s hand and said, “Chef, I have dined all over the world, but your food is the best.”

Despite bearing witness to an intimate side of American history, Mr. Haller said there was very little talk of politics in his kitchen. He said his job was to provide a sense of normalcy amid the tumult of presidential life.

Mon Dec 21 , 2020
For centuries women have been confined to housekeeping, primarily in the kitchen. So, it is quite ironic that in the restaurant business, their culinary skills are underestimated and even disregarded. With women like Tarla Dalal leading the Indian culinary space with her recipes and cookery books, it’s a shame that […] 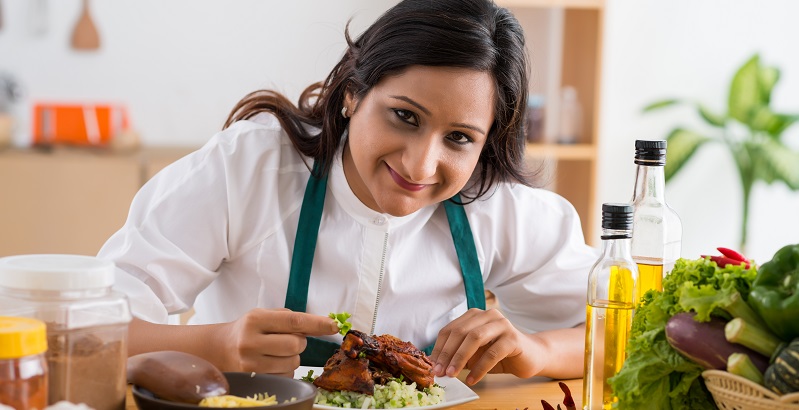