Growing up in Barbados and watching his father go from cooking at his job at a resort to coming home and cooking for friends and family, Kelston Moore developed a culinary passion that he’s carried into his professional life.

Between fatherhood and working as a private chef and as chef at the Cococabana Rooftop Bar at The Brick Hotel in Oceanside (scheduled to open later this year), he’s providing support for fellow chefs as co-founder of the Bad Boyz of Culinary, which he started in 2020 with friend and colleague Quinnton Austin, executive chef and co-owner of Louisiana Purchase in North Park.

“What did Michael Jackson mean when he said he was ‘bad’? It means the best. We are the best in all aspects of the culinary world,” Moore said of the Bad Boyz of Culinary, a collective of local chefs who want to highlight the talent of rising Black chefs in San Diego through scholarships, events, mentoring and special programs, while creating community with one another.

One of those programs is the Bad Boyz of Culinary Showcase on Monday, Feb. 21, at Louisiana Purchase. Styled after the Food Network’s “Chopped” competition, four local chefs will create four dishes from a selection of surprise ingredients provided on the day of the competition. Guests can reserve tables for specific time slots beginning at 3 p.m., with tickets ranging from $90 to $135. For reservations and more information, visit exploretock.com/louisianapurchase.

Moore, 32, lives in La Jolla Village and has a son. He took time to talk about his journey as a chef, the people he’s learned from along the way and finding the right balance between work and life.

Q. What prompted the founding of Bad Boyz of Culinary?

A. “If I had to sum up a reason in one phrase, it would be ‘stronger together.’ As a collective of goal-oriented chefs in the urban community, I believe it’s our duty to support each other and to educate our community about culinary arts and the logistics of this business. We believe our unity will set a precedent for overcoming the lack of support and any negativity associated with the idea of competition. Given that we are a network of chefs who work in catering, on yachts, in restaurants and as private chefs, we realized that there are a lot of chefs just starting out who could benefit from our accumulated knowledge.

“When people think of a chef, they automatically think of someone like Gordon Ramsay, but there are numerous notable Black chefs who’ve been pivotal in the industry. Some of those chefs include Hercules Posey, George Washington’s enslaved cook; James Hemings, the first American to train as a chef in France; Mariya Russell, the first Black woman to be awarded a Michelin star; and James Beard Award-winning chefs Mashama Bailey and Kwame Onwuachi. Bad Boyz of Culinary wanted to shift the narrative and show more of who we are, where we’re from and why we’re the best. The most effective way to do this was through collaboration.”

Q. How would you describe the Black culinary community in San Diego?

A. “A competitive brotherhood that’s also classy, innovative and thriving.”

Q. What kinds of programs and resources do you offer other Black chefs in San Diego?

A. “We offer mentorship, which has been long overdue, and we’ve facilitated a scholarship fund to help those who want to go to culinary school. We are also responsible for an array of upcoming events, including our culinary showcase.”

Q. Talk about the showcase. Where did the idea come from?

A. “It came as a follow-up to previous events we held at Louisiana Purchase in San Diego and at Park 101 in Carlsbad. We wanted to start showcasing other talent in the city. By that time, most of the community had tasted our food, so we wanted to give others an opportunity to be seen.”

Q. What are the rules for the participating chefs?

A. “The four chefs won’t be able to prep anything ahead of time. Everything will be given to them on Monday, with options for proteins (beef, chicken, pork and local fish). Each chef will have one member of the organization as a mentor to advise them or give them a creative boost. They’ll have an initial headcount to work with, making this competition a challenge mentally and creatively.”

Q. What is the purpose of the showcase?

A. “The purpose is to highlight African American chefs while having the community see the amount of talent that has been overlooked. This showcase is also for camaraderie and to build relationships that don’t typically happen between chefs, restaurant owners, vendors and the community.”

Q. You grew up in Barbados and watched your father cook; he was known for his barbecue pigtails. How did you get started in this industry?

A. “I used to watch as my dad would go from working at what’s now known as the Sandy Lane resort to coming home where he’d immediately start cooking. He would have all of his friends and people in the neighborhood come hang out, play dominoes, laugh and just enjoy life. No one was rich and no one cared. It was all about good food, good vibes, a lot of laughs and love. That’s where my passion for cooking came from. My journey as a chef has not been an easy one. There were no silver spoons here. I’ve gone from cooking in the Navy to sleeping in my car to traveling the world. Cooking is my salvation, my purpose and my life’s work.”

Q. How did you know this was the kind of work you wanted to do?

A. “I grew up cooking and I loved it, but it was my best friend, Jason Thompson, inviting me to cook with him for an admiral’s change of command at the USS Midway to solidify it as a career for me. I observed as he created dishes so elegant, but also complex. I wanted to learn, I was eager, and that was the moment I decided to take it seriously. That decision led to me being selected for the Navy’s culinary team.”

Q. Who taught you how to cook, and what did that process look like?

A. “Everyone I’ve met taught me how to cook. Cooking is a feeling and a passion. As a chef, I take a little something from everyone I meet and add it to my cooking. It could be a feeling, a unique energy or actual food; it all contributes to my cooking in some small way. However, if I must name a few specific people, I will say my father and my two best friends, Jason Thompson and Joshua Jennings.”

Q. How would you describe the food of Barbados? What kind of influence has your upbringing there had on your cooking?

A. “The food in Barbados is a mixture of African, Portuguese, Indian, Irish, Creole and British. Most dishes are a mix of marinated seafood and more than one side or salad. The standout dish of Barbados is called cou cou. It’s cornmeal porridge served with flying fish and okra. It’s definitely my favorite. All my cooking has flavoring from home or is made with techniques from home. Pretty much the base of every dish has Barbados in it.”

Q. How would you describe your philosophy and approach to cooking?

A. “I cook to make myself and everyone around me happy. That’s it.”

Q. What’s been challenging about your work with Bad Boyz of Culinary and also as a chef?

A. “Balancing life. Honoring commitments. Building relationships. When it comes to those three things, I will not accept mediocrity from myself or my counterparts.”

Q. What’s been rewarding about this work?

A. “Knowing that I created something worthwhile, artistic and fulfilling.”

Q. What has this work taught you about yourself?

A. “To be humble, coachable and, most importantly, loving myself and making time for myself and my son.

Q. What is the best advice you’ve ever received?

A. “‘The help I didn’t get was all the help I needed.’” Take the things you experience and learn from them.”

Q. What do you like about La Jolla Village?

A. “The peace and quiet. There are so many working professionals here, from a stunt pilot to authors, painters and an exotic car collector. The possibilities are endless when it comes to learning about life from different perspectives.” ◆

Mon Feb 28 , 2022
A dish from Ji Hye Kim’s Miss Kim restaurant in Ann Arbor. Chef Kim has been nominated for Outstanding Chef from the James Beard Restaurant and Chef Awards. (Photo by Jacob Hamilton | MLive) Their passion for food has not gone unnoticed. The nominations are now out for the James […] 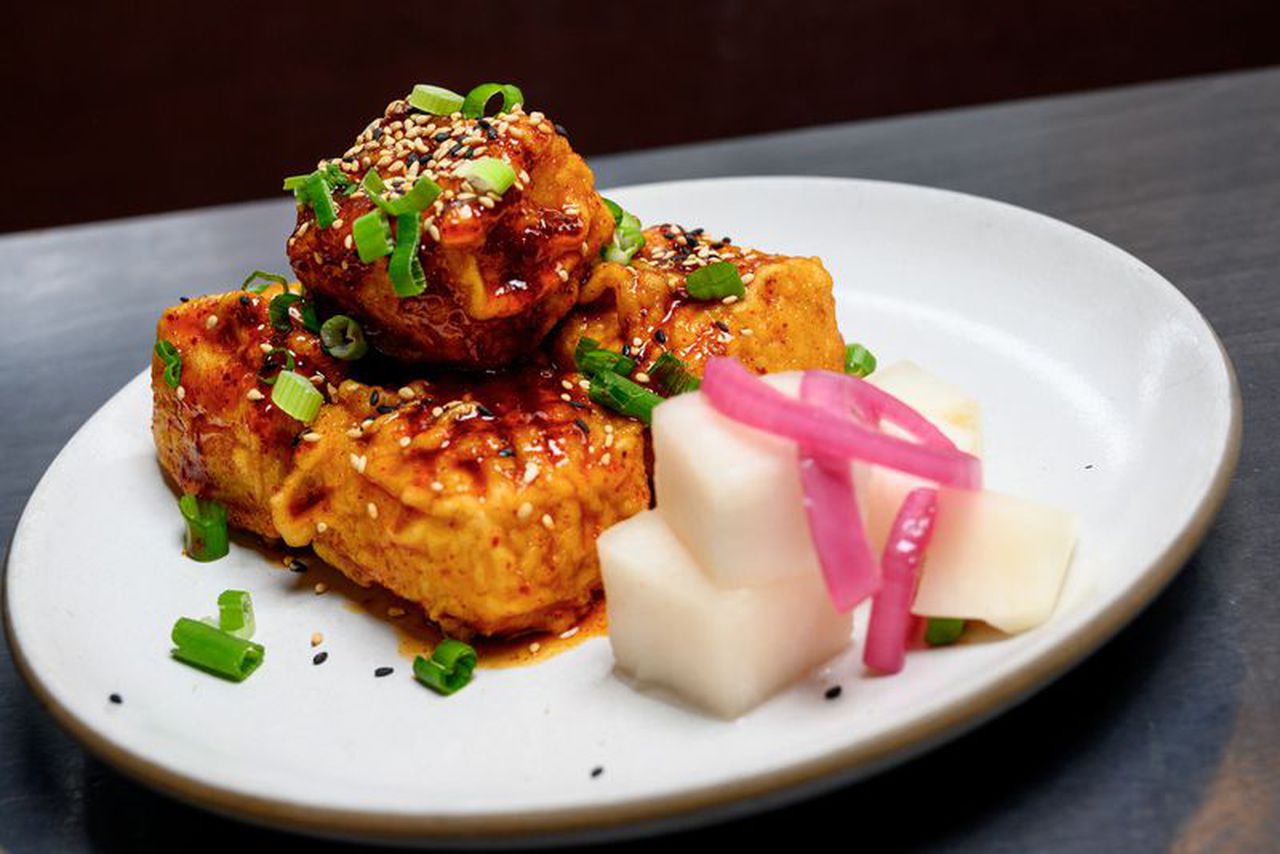