In order to help support restaurant the restaurant community as we enter the second year of the pandemic, Shake Shack is launching a year-long series of regional collaborations with chefs and restaurateurs across the nation.. The series, called “Now Serving,” will feature unique, exclusive menu items with a portion of net proceeds benefiting local nonprofits helping the restaurant community.

Shake Shack’s first regional collaboration kicks off on Thursday, March 4 in Houston. Chris Shepherd, owner and executive chef of Underbelly Hospitality, will add his own twists to the menu at local Shake Shacks. Net proceeds will be donated to Southern Smoke Foundation, a crisis relief organization for people in the food and beverage industry, co-founded by Shepherd himself.

“It’s been so much fun working with Shake Shack on a collaborative sandwich to benefit Southern Smoke,” said Shepherd. “Our industry continues to struggle, and the money raised from this sandwich will help food and beverage workers in crisis. Houstonians have such huge hearts – and appetites – so I hope they come out to eat for a cause and raise funds to support our industry.”

Special menu items have yet to be announced, Shake Shack’s Now Serving schedule is as follows:

Net proceeds from all the collaborations will go to the organization of the chef’s choice, and guests will be treated to exclusive swag when ordering the pop-up menu items.

“We’re thrilled to partner with some of the best chefs in the country for this series while giving back to the restaurant community during these difficult times,” said Mark Rosati, Culinary Director at Shake Shack. “We love crafting fun, delicious menu items in an elevated way, inspired by our fine dining roots and with an emphasis on premium ingredients. Now Serving brings together a unique vision and style from top chefs who share our passion and commitment, paired with our roadside-inspired classics. We can’t wait to show our Shack fans what we’re cooking up.”

Throughout the pandemic, Shake Shack has been getting creative with ways to intrigue new and longtime customers. A Korean chicken menu item launched in January, and December brought specialty truffle items to select markets. Though the international burger chain was under fire last summer for accepting, and then returning, a $10 million PPP loan intended to help sustain small businesses, it seems Shake Shack is trying to move past the incident, and raise funds to support the local, independent restaurants across the country.

Wed Feb 24 , 2021
MANITOWOC – Two Lakeshore-area chefs are using their cooking chops in hopes of bringing some national attention to Manitowoc restaurants after a tough year. Greg Czekala, owner and chef at Broken Plate Catering and Diner, and Myke Hollahan, owner and chef at Holla Restaurant, are vying for a chance to […] 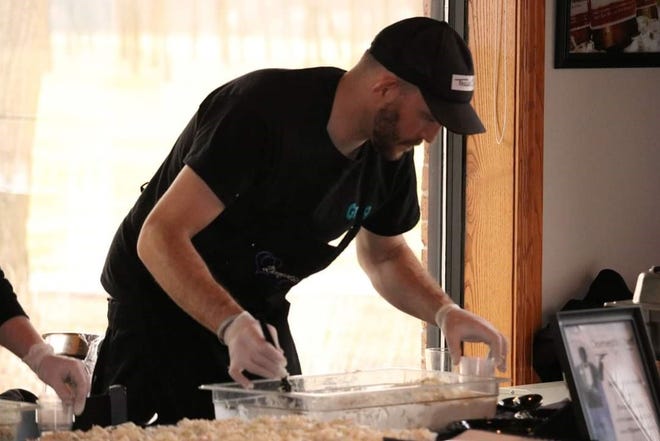